New LUMIX GX85 is made to capture life on the move 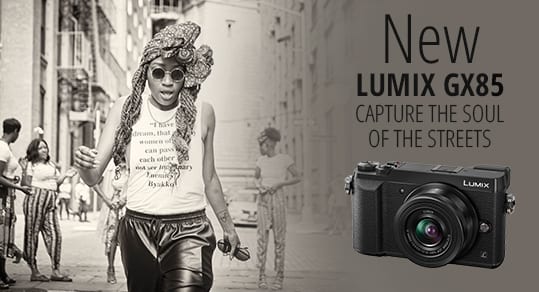 “The DMC-GX85 has similar lines to our breakthrough DMC-GX7 which proved incredibly popular with enthusiasts.  We’ve taken their feedback to offer a camera that supports vivid imaging with a powerful stabilisation system and precise features – designed for the meticulous photographer who seeks to express their creativity with that unique shot.” -Doug Campbell, Senior Product Manager, Imaging, Panasonic Australia

The class-leading GX85 is Panasonic’s first G Series camera to incorporate 5-axis in-body stabilisation. This operates during both photo and video recording, including 4K shooting, to deliver a superior performance with stable imaging in situations where this has never been possible – from capturing images at a slow shutter speed or with a telephoto lens, to handheld video shooting. Plus, using any one of the 13 compatible Panasonic lenses, you can also enjoy Dual IS, which now combines the new 5-axis in-body stabilisation with the 2-axis optical stabilisation in the lens for ultimate stability.

Capture the world as never before using the GX85’s 4K feature suite. 4K Video offers four times the resolution of Full HD, and easy-to-use 4K Live Cropping for stable panning and zooming during recording. 4K Photo – now with a dedicated on-camera button – ensures total precision in capturing the defining shot with 4K Pre-burst mode which shoots 30 frames per second before and after the shutter is released. Post Focus mode allows the user to choose the focal point of an image, after the shot has been taken.

The high-resolution 2764K-dot Live View Finder, offering pin-sharp 0.7x magnification, is perfect for framing your shot and capturing every detail. What’s more, the Eye Sensor can be activated simply by looking into the view finder and the 3-inch 1,040K-dot rear monitor has a versatile tilting design which is handy when composing photos at low angles.