The One Making Waves: LUMIX GH5

WATCH: The One Making Waves – Teaser

There’s a natural relationship that exists between a surfer and a photographer and this is what the team behind The One Making Waves set out to document. At the heart of this video (and companion image gallery), we see free surfer Dion Agius taking on the waves in Mozambique with professional sports photographer Steven Clarey using the new LUMIX GH5 hybrid camera to catch every dazzling moment. Director, Peter Hamblin said depicting their connection hinged on letting the action unfold organically.

“We wanted to document that. We didn’t want to stage anything, we didn’t want to force anything. We threw Steven and Dion into Mozambique with the GH5; Steven came out of the water and what he was capturing blew me away.”
– Peter Hamblin, Director

The rugged and reliable GH5 is built for professionals whose reputation rests on their ability to capture once-in-a-lifetime moments. These field performance features were really put to the test on The One Making Waves, with the camera seamlessly being switched between steadicam rig, drone and water housing throughout the shoot. Director of Photography, Chris Kelly called it an extreme road test.

“I think if you were gonna take a camera on a road test and put it through its paces, we took it on a pretty extreme version of that. Extreme heat, rain and wet and sand and dirt and dust, and we definitely put those cameras through their paces and they stood up. You know they were still working, and we were really pushing the performance of those cameras on the trip.”
– Chris Kelly, Director of Photography 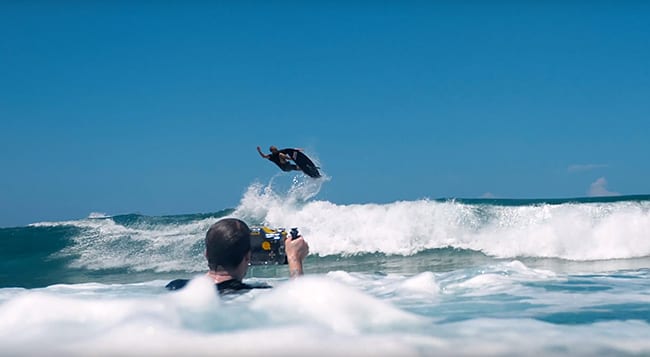 The GH5’s reliability and versatility in the field also impressed sports photographer and LUMIX ambassador, Steven Clarey. To get great shots in such a fast-moving environment, Clarey made the most of camera features such as auto focus tracking, 6K photo and Dual IS.

“When Dion was taking off on a wave, the focus would fix on Dion and as he’s flying toward me the focus would follow all the way through on the shot and I capture the frame that I want. The GH series has always been known for video. Now with the introduction of the 5, the still images from it are absolutely fantastic… And having that 6K photo function with 18 megapixel stills grabbed from video, while also the 20 megapixel normal stills from the camera – they’re great!
“The Dual IS on the GH5 is really, really cool. We were using it from the back of the truck and I was shooting in 6K photo mode. It’s silky smooth! It gets rid of all little micro vibrations. Hand hold the camera, lock your elbows in, and shoot away.”
– Steven Clarey , Photographer

WATCH: The One Making Waves – Interviews

Offering the perfect balance of high quality stills and phenomenal video technology, the LUMIX GH5 really is our most impressive mirrorless camera to date. The One Making Waves put the camera through its paces in the most extreme of conditions but its incredible features proved the GH5 is definitely worthy of its flagship position in our award-winning LUMIX range.

Watch photographer Steven Clarey use the LUMIX GH5 to capture free surfer Dion Agius taking on the waves in Mozambique.